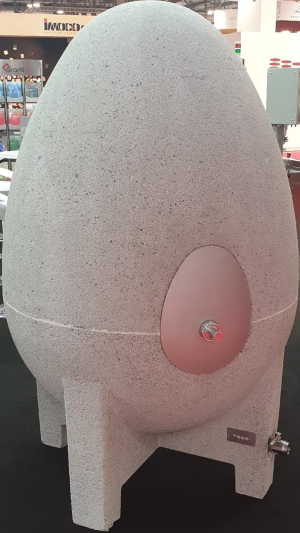 The shape of the Eggoist concrete egg is in perfect geometrical harmony.

The natural concrete used to produce Eggoist wine egg them is microporous which enables the micro-oxygenation of the wine. They breathe and can absorb thermal shock. This means any wine temperature increases are gradual.

The vats have no angle which creates a vortex providing a natural fluid movement, thereby providing constant wine movement.

These vats are created specifically for the exacting wine maker who is interested in biodynamics and fluid energy.

The egg-shaped concrete vat can be used as a complement to any barrel just as any vintage can be entirely raised in “an egg” to better preserve fruitiness and freshness. The aromas develop in an optimal manner and no stirring is necessary given the vortex movement.

The inspiration: To design their first egg-shaped concrete vat, Eggoist team got their inspiration from the Golden Ratio. It’s a proportion initially defined in geometry that corresponds to the Greek letter « φ ». It is considered particularly aesthetically pleasing. An Italian monk brought it fame during the Renaissance in a mathe- matics manual and coined it the divine proportion. The Golden Ratio has been frequently used for centuries by figures of the likes of Pythagoras, Leonardo da Vinci.